Lessons from My Father: The Best Career Advice a Father Gave a Son

Posted by Stephen Graveman on June 16, 2013 in Uncategorized

My earliest introduction to the business world was through my dad. Ever since I was a little kid, I remember being fascinated by the oddest things that were part of my dad’s life (and surely things that he either didn’t pay mind to or despised). Trade shows seemed like a blast, traveling and sleeping at hotels sounded awesome, and having the freedom to pin comic strips to cubicle or office walls blew my little kid mind. Plus, you could go to lunch whenever you wanted, and eat whatever you wanted! All this, and they give you money for spending your time there all day? Heck, I was wasting all my time at school, and wasn’t being given anything in return! I distinctly remember not being able to wait until I could work one day.

As I got older, my dad started bringing me along to some trade shows and events. One summer, during an extremely rough patch of my life called “middle school” (I prefer “living hell” myself), my dad decided to just bring me along to Colorado. We traveled all along the state, where I got to meet my his customers and clients and see his relationships and how he worked. It’s an experience that I’ll never forget; that rare chance to see your own father in another element besides “Dad”.

Obviously, the years have gone by, and I’ve gotten older and realized that work isn’t always the fun thrill ride that I thought it would be. However, my successful job interviews and day-to-day interactions can be attributed to advice that my dad gave me throughout the years. So, in honor of Father’s Day, I’ve compiled some of the best career advice he’s ever given me. Happy Father’s Day, dad. 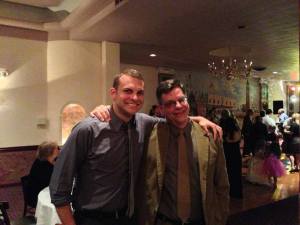 On the aforementioned Colorado trip, my dad introduced me to many of his closest customers, including people who had heard about me for years but never met me. He also introduced to me the concept of how to shake a hand. Firm grip. No more than two pumps. Make eye contact and smile. Don’t squeeze too hard, this isn’t a contest of strength (and being 12, I was likely to lose). However, don’t give a limp wristed handshake either. For years afterwards, I’d use dad’s advice to appear more professional and mature than my age in interviews. These days, giving a proper hand shake is second nature, but if I go through a period where I haven’t done it in awhile, I can hear my dad’s voice reminding me the tips.

Above: How to NOT shake a hand.

One thing that stood out to me during the Colorado trip was how my dad’s customers treated him like a family member or like their best friend. Being in sales, my dad’s surely seen the disingenuous colleagues who say anything to seal the deal, but he never went down that path. His argument for why not makes sense: Those people may land the first sale, but they’ll never land another after. It’s the relationships that matter, and he’s forged friendships and loyalty that has lasted decades. While they’re happy to buy from my dad, and he’s happy to sell to them, it’s their friendships that keep that partnership alive. You can always find a better price somewhere, but good service is hard to come by. Working in social media marketing and public relations, this particular philosophy has helped me time and time again.

3. The best food on a business trip is the smallest, greasiest, diner.

4. Never pretend to know something you don’t.

Like any teenager, I used to think I knew it all. And whatever information that I didn’t know, well then, who cares? My dad was a big proponent of “Never say ‘I don’t know’, but rather say ‘I’ll find out'”. I remember scoffing at this at this advice, thinking it wouldn’t matter to the guy on the other end of my register, screaming at me and demanding to know why his coupon won’t apply to his purchase. But it turns out that making an honest effort to find an answer will placate even the most frustrated customer.

Unacceptable in the business world.

5. Don’t take life too seriously, you’ll never get out alive.

My dad’s always been a fairly laid back and comedic guy, and I think it’s one of the reasons that he’s so healthy at his age (especially considering how stressful sales can be). He’s not exactly running around pulling pranks on his coworkers, but I think he’s always been good at keeping things in perspective. Working down the street from my dad, I often meet up with him for lunch;  even when he’s having a rough day, he never lets it consume him outside of work. This lesson has probably been the hardest for me to learn, and I still struggle with it at times, but he’s been a great role model to look to when I’m obsessing over something work-related on vacation.

This lesson has saved my hide so many times that I can’t even begin to count. For every interview, for every important meeting, and even for first dates, I’ve always showed up no less than fifteen minutes early. If I had to drive around the block, or sit in my car and relax, so be it. But there’s very few things as stressful and terrifying as thinking you’re running late for something important, and you’re blocked in heavy traffic.

I used to be a chronic over-thinker, taking a simple comment and falling down a weird rabbit hole that lead to a conclusion so far-fetched it wouldn’t make sense. Or I would often start a school project and come up with such an ambitious plan that it almost ruined my grade (I once committed to making a stop-motion film about dinosaurs in middle school, having no idea just how time consuming and difficult that was).  My dad would sit down and remind me: Keep it Simple, Stephen. I later found out that my dad didn’t come up with the K.I.S.S. theory, and that most people used “stupid” instead of “Stephen” (were they synonyms to my dad?), but it doesn’t matter. He’s the one who taught me the lesson, and I’m a better man for it.

I’ m honestly not sure if my dad’s as disorganized as I naturally am, but one thing he’s always advocated is taking notes. Take a notepad to an interview to write down details. Take notes during every office meeting. Take notes during school, there’s no way you’ll remember everything the teacher’s saying. I used to think that I could retain everything by just listening, but I realized taking notes helps in three ways. First, as the months go by, you will forget details and it’s handy to have them recorded. Second, writing notes, even for the most mundane meetings, helps you to remember them better. And third, it will never fail to impress your teacher/interviewer/boss that you’re taking the meeting seriously enough to write notes down.

I’m sure I could write several more lists of workplace lessons my father taught me, and like any good teacher, I’m continually getting new lessons (whether I ask for them or not!). Both of my parents’ knowledge has been incredibly helpful in starting my career, and I’m sure I’ll carry the lessons with me wherever I go from here. And who knows? Maybe one day I’ll be passing on the same advice to my kid. Maybe by that time, I’ll be smart enough to sprinkle in my own words of wisdom. Then again, maybe I shouldn’t dilute a winning formula for success.

What’s the best career advice your father (or mother) have given you? Leave them in the comments below!

← A Cure for Social Media and the Medical Field
Why Can’t Brands Leave 9/11 Alone? →

16 comments on “Lessons from My Father: The Best Career Advice a Father Gave a Son”